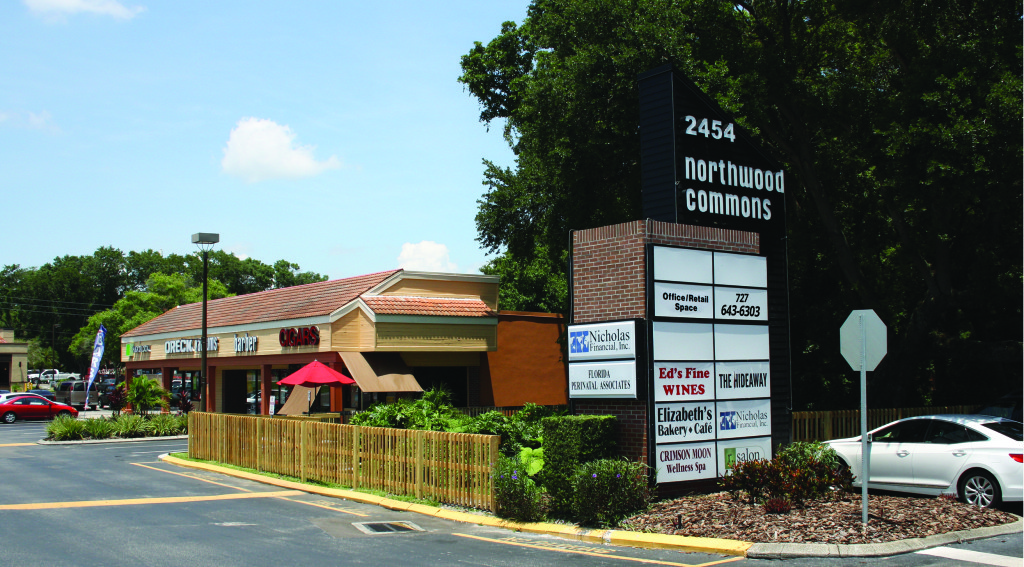 NREV applied its turnaround strategies and services, as receiver, property manager, leasing agent and construction manager, to revitalize Northwood Commons (the Project), a retail and office center in Safety Harbor, Florida. The Project’s state of disrepair and declining occupancy was exemplified by the condition of its main pylon sign on McMullen Booth Road. This sign still had panels for many of the tenants who had left the Project over the prior 6 months, or were about to leave. The sign panels were dimly lighted, broken and impossible to remove individually. Many of the remaining tenants had short lease terms. The mortgage was 14 months delinquent. Upon becoming the court –appointed receiver, Monroe, contracted with NREV for all commercial services, focused on the Project for 22 months, and turned the center around with an intense effort which began immediately:

1. Initial Review of Project: NREV conducted an initial inspection and legal review according to the procedures described in the Property Management section of NREV services. As the Project was 28 years old and distressed, the inspection and review was extensive. Thereafter, NREV prepared an operating and capital budget, rent roll, and Value Plan with goals and timetables.

2. Protection of the Project: While the Project’s insurance was current, it failed to meet certain key mortgage requirements. Such insurance expired within six weeks, real estate taxes were due in four months, and approximately $40,000 had to be paid immediately to maintain essential services and avert liens. The center had no cash, other than a $25,000 cash advance. By employing strict rent collection practices and negotiating payment plans, and conserving costs, NREV met all such obligations in a timely manner.

3. Legal Compliance: NREV brought the Project into legal compliance by repairing significant deferred maintenance deficiencies. The most serious problem was an outstanding 2010 complaint by SWFWMD, involving the entire drainage system. The complain had recently been transferred to the enforcement section. Extensive work was needed to achieve a full compliance letter, as described by the civil engineer hired by the receiver. The City of Safety Harbor cited this achievement as a major reason for awarding the project the Mayor’s award of excellence, as described in section 17 below. While restoring the drainage area, the Receiver and Wild Birds Unlimited converted the area to a wild bird habitat area which now serves as an attraction for the retailers and was key in attracting two office tenants, ROTH-Sodexo and the State Farm insurance agency, who lease over 22% of the Project’s formerly troubled 2-story office building.

6. Retail Leasing Program: NREV focused first on retail leasing because: a) the retail market was far stronger than the office market; b) retail leases were producing twice the contribution to net operating income (NOI) per square foot than office leases; and c) the office buildings needed extensive repairs, improved signage and reconditioning of vacant suites to be leasable. Leases of important existing local retailers such as Ed’s Fine Wines, Sole n Heel, and national companies such as H&R Block and Oreck Vacuum were first renewed to restore confidence in the Project. NREV uses its in-house legal, marketing and development skills, to lease as effectively as any broker in Florida.

(i) NREV encouraged two quality retailers, Elizabeth’s Bakery and Café and Sabai Asian Bistro to purchase the stores of weak tenants and assume their leases by favorably amending and assigning the leases. Intensive legal and negotiating efforts were required for these two deals. At receivership inception, NREV leveraged existing fixturing to lease to an experienced veterinarian, Enterprise Animal Hospital, within one month of lease termination by the prior tenant—a lease which reversed the downward occupancy percentage, and started the climb to 100% retail occupancy.

(iv) NREV believes that the leasing brochure for every vacant space should be first class and comprehensive, including as built space plans, so that it can be as effective in digital marketing as at the point of sale (lease).

7. Increased Center Identity and Signage: To increase public awareness of the Project, NREV negotiated a variance with the City of Safety Harbor, allowing a height increase of the Project’s main

pylon sign on highly trafficked McMullen Booth Road. The visibility of the Project was further increased by converting all pylon lighting to LED and adding an internally illuminated address sign. The increase in height also enabled a 50% increase in the number of valuable tenant signs on McMullen Booth.

8. Increased Office Building Signage: NREV obtained City approval to place innovative tenant signs on the facade of the office building and restored the exterior directory, which had been abandoned and covered over. 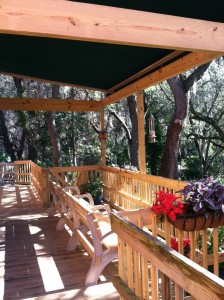 11. Commenced Office Marketing Program: NREV began an aggressive office leasing program by implementing an innovative office Tenant leasing signage program, creating attractive individual flyers for all vacant suites, which included as-built space plans, and posting quality listings online. Several office (and retail) tenants were attracted to the Project by conversion of the formerly troubled creek area into a wild bird habitat area-visible from all offices and stores backing onto the creek. Two key office prospects, ROTH Sodexo and one of the largest insurance agencies in the Tampa Bay area, Craig Duncan (State Farm) insurance agency were referred by retail tenants. As in the case of the florist, the Craig Duncan Agency had been a former tenant at the Project—returning because of the center’s turnaround.

13. Leasing/ Renewal Success Metrics: NREV achieved an occupancy rate of 100% in the retail portion and an overall leasing rate of 90% for the Project. NREV renewed or leased 73% of the Project during its 22 month receivership and management period. Projected per square foot rent level goals were met. Retail sales have substantially increased. Average remaining terms of tenants have doubled.

14. Strategic Leasing Decision: The turnaround was enabled by Receiver’s decision to renew the center’s largest office tenant, for two consecutive one year terms, rather than pursue a long term renewal, entailing large tenant finish and leasing costs. This labor-intensive decision was praised by the CEO of such tenant, and provided the necessary operating cash flow to achieve 100% retail occupancy (representing 50% of the Project’s entire value—over $5 million), renovate the office buildings grounds, as well as fund the leasing costs and tenant finish to renew leases, expand tenants and lease the majority of the troubled two story office building.

16. Conclusion of Turnaround Program and Discharge of Receiver: Foreclosure was recently completed, and Project cash flow was now sufficient to fund a long term renewal of its largest tenant. A seamless transition to the foreclosure purchaser was facilitated by reconciled financial and cash statements, and electronic transfer of key documents. NREV received many positive reviews from stakeholders such as the special servicer, the City of Safety Harbor, tenants, professionals and other stakeholders. 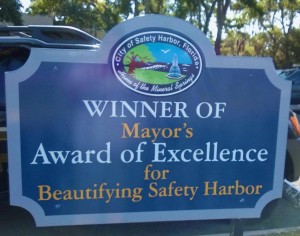